The analysis of Parson’s Pleasure. 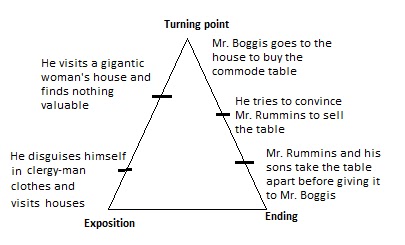 In the exposition part, we are introduced to Mr. Boggis. We learn that he is a swindler as a dealer in antique furniture. We are told how he began this career. After buying an antique chair in a village, he decides to visit the other houses around. He disguises himself in clergy-man clothes and continues visiting houses and buying antique furniture by paying less than their value. We also learn some characteristic features of him such as being a convincing person and having an understanding of human psychology.

On Sunday, he is on his regular visits around with his map and he is in the county of Buckinghamshire. He visits a house in which a gigantic woman resides. He sees nothing valuable in the house and leaves.
c. Turning Point

He knocks on the door of a house and nobody opens the door. While he is having a look around, he sees a very famous and invaluable seventeenth century commode table inside and later on, he comes to the house to buy this table. I thought this is a turning point rather than a climax because there is not a strong conflict. With this decision to buy the famous invaluable commode table, he prepares his misfortune. He will cause the destruction of such a masterpiece. Moreover, everything can go on normal for Mr. Boggis for the rest of his career. He can continue deceiving people and buying valuable furniture but he will never get the fame of being the person who possesses the famous mahogany commode table. The worse thing is that his trick which has helped him so far will cause such an end. So far, he has deceived people easily with his clergy-man role but now; this role causes the furniture to be destroyed ironically.

He sees that the owner, Mr. Rummins is not a fool. He tries to convince Mr. Rummins by telling a lot of deceiving tricks. He has to struggle but he manages to convince him to sell the table at the end. Even after he is convinced, Mr. Boggis tries to decrease the price by telling he just wants the legs of the table. He manages it too.

Mr. Rummins is convinced to sell the table but he and his sons think that the parson’s car will not be convenient for carrying that large commode table. Thus, they take the table apart leaving us in surprise.

Mr. Boggis is the major character and Mr. Rummins and his sons are the minor characters. Mr. Rummins and his sons, Bert and Claud are flat characters. They can be briefly described as difficult to convince, suspicious, cautious, curious men. Mr. Rummins can also be seen as a clever man; at least he is not foolish. The major character, Mr. Boggis is round, complex and dynamic. We have access to his psychology. According to my interpretation, he is cunning as he deceives people and tells lies. He is clever and skilled in convincing people and he is proud of himself because of this. He is self-motivated and also good at role playing. He is also greedy because he tries to decrease the price of the table while he is bargaining even though Mr. Rummins has already offered a price far below than its real value.

Greed, selfishness, persistence, pursuit of wealth and fraud can be considers as the themes of the story. All the deeds of Mr. Boggis are examples of greed and selfishness. He deceives other people to be rich. He buys the valuable furniture for low prices and wants more and more.
4. Mood

I think it is dull at the beginning but it becomes thrilling when he discovers the invaluable furniture in the house and trying to convince Mr. Rummins to sell it. When the men decide to take apart the table and during the process, it becomes a little bit tense.

The setting is sometimes external and sometimes internal. The story takes place in countryside in England. Mr. Boggis visits a house in the village of Brill. There is no specific time reference but I guess it is late 20th century or the beginning of 21. century because while Mr. Boggis is guessing the value of the table, he says that the other furniture like this cost thirty- nine hundred guineas in 1921 and the same piece now would worth ten thousand pounds.

The language of the story is very easy to understand. There are some words which I think to be metaphors. Mr. Boggis is described as ‘a small, fat-legged man with a belly’ and I think his belly can be a metaphor for his greed. The other thing is that Mr. Rummins interprets Mr. Boggis as ‘a clergyman with the bulging eyes’. His bulging eyes can be metaphor to his cleverness according to me because I remember from one of our Linguistics course that there was a man who interpreted ‘protruding eyes’ as a sign of intelligence. There are also ironies in the story like a swindler in clergy-man clothes and like a swindler who condemns swindlers for what they do. Some foreshadowing elements can also be seen. The title is a foreshadowing element giving a hint about the story. The sentence of Mr. Boggis, which indicates that the people who deceive other people will have trouble is also a foreshadowing element giving a hint about Mr. Boggis’s fate. (Page 7).

It is a surprise and open ending. He convinces Mr. Rummins to sell the furniture at a very low price after a long process of bargain. However, we do not expect those men to take apart the furniture. It is also an open ending because the story ends just as Mr. Boggis is coming over to take the furniture. We only know that he will see the broken furniture but we do not know what he will say or do and what will happen next.

The environment becomes tense while Mr. Boggis tries to convince Mr. Rummins to sell his furniture.

and create a dialogue that could have taken between two characters in the story. Then illustrate any part of the story. Draw it and upload the pictures to your blog.

This entry was posted in SENIOR 1, SENIOR 1. Bookmark the permalink.